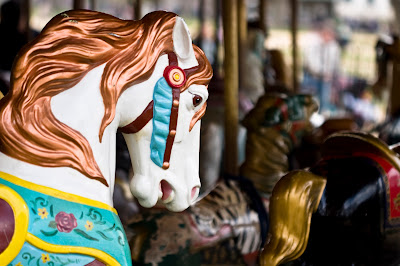 Photo by a.pitch
When Kaye and her mother move back into her grandmother's house, Kaye takes the opportunity to call on some old friends. There's Janet, and her brother Corny...but there are also three faeries she hopes to find. But the faeries don't come when she calls them, and even leaving out milk for them doesn't bring them to her window. She starts to doubt that they were real, but then, whilst out with Janet and her friends, she sits on an old carousel horse. Kaye imagines it coming to life, imagines what it would be like to ride it, were it alive, and then, for just long enough for Janet's boyfriend to see, it does start to move. Kaye runs away from the group, and it's whilst she's on the way home that she hears strange sounds coming from the woods. She goes to investigate, and that's where she meets Roiben, a faerie knight. He's wounded, and she helps him, relieved to know that the fey are real. With his silver hair and strange presence, she can't get him out of her mind.

Soon after, Kaye finally meets two of her old friends again and finds herself entangled in a plot to ensure the freedom of the solitary fey, who will be bound to the service of the Unseelie Court for seven years if the planned Tithe - the sacrifice of a human - goes ahead. Kaye's friends explain that they intend to trick the Unseelie Queen, Nicnevin, by having Kaye taken to be used as the Tithe, Kaye, who is actually a faerie, but has been disguised as a human all her life. At the last minute, Kaye's real self will be revealed, ruining the Tithe, but Kaye doesn't want to wait. Kaye wants to discover what being a faerie means now.

This is actually the second time I've read Tithe, here are my initial thoughts on it, as included in a Goodreads review. I gave it four out of five stars:

I would have loved this had there just been a bit more to it. It seemed more like a snapshot than like I was pulled into the world of the story. I liked all the details that were there, there was just too much missing, like it was pared down to the bare minimum to make a good story. I felt like there should have been some flashbacks or some other device to show us what Kaye's life was like up to the point where Tithe begins. The characterisation was good, the story worked, but I wanted to become absorbed, and sometimes, you just need more pages for that, to be in the world longer. People with a shorter attention span or tendencies to imagine that they are the protagonist (something I grew out of) will probably adore Tithe.

The pacing was also uneven, what we get of the story feels right as we read it, description balanced nicely with action, but it jumps too often, and there was little time given to showing us what the protagonists actually thought about all that was going on. The action takes place over a couple of days, but it slows down often enough that I felt more reflection from the point of view characters would have fit in nicely.

Despite my initial misgivings I liked it enough to want to read the second in the trilogy, Valiant. I reread Tithe this year before continuing with the series. I enjoyed it more this time around, possibly because I expected the concise storytelling, and could just let the lovely descriptions wash over me without wishing there were more actual scenes to the story. I do still think that there could have been a bit more to it, and I still didn't entirely empathise with Kaye's character - she's too much of a drifter. She gets curious and asks questions, but doesn't demand that they are answered, and she typically goes along with what other characters want without thinking about it much. Maybe that's the effect of a survival mechanism developed to help her cope with life following her mother around from nightclub to bar to nightclub. This improves towards the end, when she works something out before anyone else.

The level of description in Holly Black's writing is perfect. The descriptive sections are fairly brief, but every scene has atmosphere and the details about the faerie courts are great, I could easily visualise them in my mind. The moral questions raised in the story fit very well within their context. Like humans, the faeries vary in terms of personality and regard for ethics, but all of them have dark aspects. The fairies are not benevolent spirits - many of them see humans as lesser beings, toys. It's very much a book for older teens because of this - there's plenty of death and pain.

I've finished reading both sequels and I loved them, so I would happily recommend Tithe to fans of dark fantasy, fans of dark faeries, older teenagers, and people who, like me, prefer to read books for older teens. My review of Valiant, the second in the Modern Faerie Tale series, will follow shortly.

Which YA author has the cutest dog?